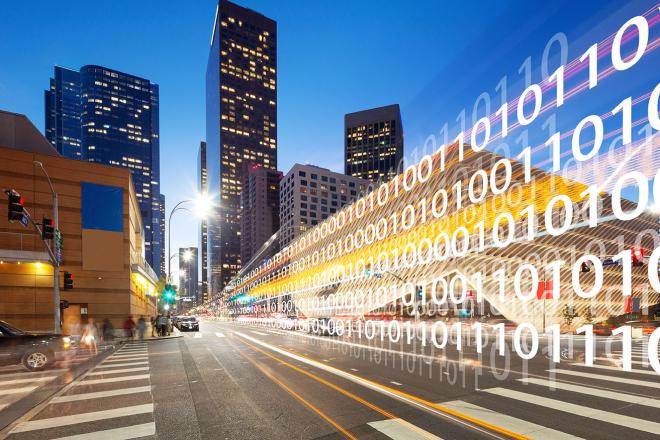 Pick your headline. All three themes were heard loud and clear at the 2018 Smart Cities Connect event in Kansas City. I was really looking forward to attending this event since Kansas City has been one of the leaders in bringing innovative Smart City ideas to their constituents.

Bob Bennett, the KC Chief Innovation Officer did a great job kicking off the conference. He stressed the importance of partnerships and collaboration among cities and vendors. He cited the collaboration with Chicago, San Diego, and South Bend CIOs, “stealing” their great ideas around water management, lighting, and the use of sensors. He went on to discuss how his city is working to leverage the data they are collecting to be more proactive in the health and safety arena. Bob mentioned he didn’t think our kids 10 years or younger would ever need a driver’s license and many heads in the audience nodded in agreement.

Our friend DATA was brought up constantly. I do not want to steal anyone’s tag lines, but we did hear everything from Data is the new revenue, the new Oil, and yes even the new Bacon. Everyone wants it, everyone is consuming more than they should, and in most cases, we seem to have more than we need. Many of the speakers and suppliers spoke of the importance of working with open API’s and standards. They also stressed the importance of partnerships and open platforms.

During the Energy and Infrastructure Panel three suppliers (Ubicquia, PTC, Site 1010) presented to a panel of city officials. At the end of each presentation the panel asked questions. Ian Aaron, CEO of Ubicquia brought the company’s product portfolio with him to showcase the size and flexibility of the LED fixture – NEMA powered solution set. Deborah Acosta, the Chief Innovation Officer from the City of San Leandro, CA came at the panel hard insisting that cities already have plenty of data. This begs the questions she brought up, “How do we know what we need and how often? When should we ensure there is policy regulating the data? How do we decide if or when to allow public access?” All great questions but what I found is the answers will vary from municipality to municipality.

It was disappointing to hear how significant the digital divide still is and how many cities are still struggling to bring technology to everyone. Case in point – Mark Farrell, Mayor of San Francisco discussed how over 100K of his residents don’t have internet access in his city.  Fifteen percent of San Francisco’s students don’t have internet access at home to do their homework. His vision: “Anything less than 100% internet coverage is not acceptable!” The Mayor of San Francisco came from the public sector and he stressed the importance of the P3 model: Public, Private, and Public/Private teams working together. He firmly believes the Internet should be considered a 21st century utility just like water and power.

I really enjoyed the panel with Hardik Bhatt. Hardik’s list of credentials include CIO for the City of Chicago, CIO for the State of IL, and his current position, Leader – Smart Cities and Mobility verticals with Amazon. It was informative to hear from a person with 10 years of city, state, and IoT supplier experience. He mentioned the industry WAS too focused on sensors looking for problems, generating data that wasn’t needed. Frank Sgambati, the Director of Smart City Development from Bosch was on the same panel. Frank mentioned cities should start with upgrading their street lights to LED, leveraging the energy savings into other Smart City initiatives.

Many people are only accessing the internet through cell phones. This makes the advances of 5G even more important. Sprint did a great job discussing this in one of the break-out sessions. One of their big challenges is getting 5G radio antennas close to cell phone users.  The old 500-foot towers will no longer support the new technology. This is forcing Sprint and other carriers to identify creative locations closer to users to mount their antennas. Street light poles are the ideal height and already have a power source.  This specific solution was discussed in a panel led by Tre Zimmerman, CTO and Co-Founder of Ubicquia, and other lighting executives. Tre stressed the logical use of light poles for connectivity and then utilizing fiber typically found in most traffic cabinets for back haul.

The consensus at the show was that a solid infrastructure is required for Smart Cities and to help remove the digital divide. Cities are listening to each other and starting to leverage their partnerships where applicable. Cities are seeing that the power of the street light can be leveraged to build robust network infrastructure.

The Ubicquia portfolio was developed with partnerships and collaboration in mind. Connected streetlights with simple connections to existing municipality fiber or ethernet infrastructure, an open API platform to encourage and streamline adding 3rd party sensors and platforms, and a Small Cell solution that can enable cities to utilize their light poles as revenue producing solutions is the path to continued success in this burgeoning marketplace.

Ubicquia offers municipalities, utilities and mobile operators a cost-effective and expandable platform for deploying smart city, broadband and small cell services. The company’s Ubicell, Ubihub™ and Ubimetro™ product lines are NEMA socket-compliant and compatible with more than 360 million streetlights globally. Ubicquia is actively involved in organizations such as 20-20 Cities, GSMA, IES, the LoRa Alliance and the Wi-SUN Alliance to help drive efforts to make global smart connectivity a reality. To learn more about how Ubicquia can make your city simply connected and simply smart, visit www.ubicquia.com or follow us on Twitter , Facebook and Linkedin