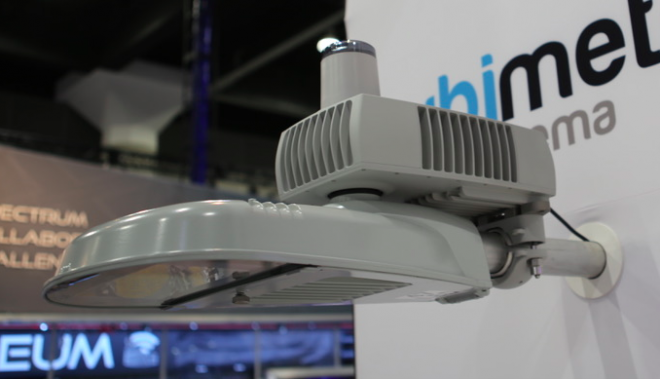 The startup Ubicquia is touting its streetlight-powered small cell as a relatively easy way to deploy small cells for LTE densification and for 5G because streetlights are already permitted with municipalities. In addition, streetlights come with electricity, and they’re often in close proximity to fiber for backhaul.

Ian Aaron, CEO of Ubicquia, said there are 360 million streetlights around the world that have a common electric socket. This socket, known as the ANSI C136 (or NEMA) socket, “has been around for 55 years,” said Aaron. “It’s a common socket whether in Australia, Germany, USA, or Brazil. We build products that plug into that socket.”

One of Ubicquia’s products is its Ubimetro small cell, which can be mounted onto existing streetlights. Aaron claims the Ubimetro for streetlights is a better option than deploying small cells onto new cellular poles or onto cable strands.

But Aaron says that not all cable aerial infrastructure is strand-mount. He said that strand-mount refers to a specific type of cable that is reinforced with an internal metal wire in order to support devices that could weigh up to 30 pounds. “Only a small amount of the cable infrastructure is strand,” said Aaron. “They use strand for areas where they have to hang the large splices. It’s not universal.”

Conversely, streetlights are pervasive, and they’re conveniently located near homes, businesses and cars. Aaron said, “The issue around small cell densification is not about the technology; it’s about getting permits and persistent power.”

Streetlights already have electricity. But cable strand, on the other hand, sometimes has to have power inserted into it, and there are other power issues to solve.

John Hoadley, director of product marketing at Casa Systems, said deploying strand-mounted small cells on the cable plant, “does require some very specific expertise.” He said cable power is a variation of AC power known as quasi-sinusoidal (or HFC power). “Cable power is something unique that really works for them, but it’s not what you’d find normally for pole-mounted or macro cell,” said Hoadley.

Ubicquia is based in Melbourne, Florida, and it employs about 85 people. It’s primarily targeting businesses in the U.S., Latin America and Europe. In late 2019, it announced it was working with the vRAN vendor Altiostar to combine its streetlight-compatible small cells for CBRS spectrum with Altiostar’s Open vRAN software.

Ubicquia doesn’t have any named customers, yet. The company is planning its first commercial product and first live small cell deployments for early 2020. It could potentially work with carriers that are densifying their networks. Aaron said utilities are also interested in participating in the rollout of small cells because it offers them a new revenue opportunity.

“The beautiful thing about streetlights is you’re at about every 50 meters and with proximity to cars and people,” said Aaron. “You’re not cluttering up the cities. People typically don’t see these things.”

“If you look at a small cell deployment today you would see a big box that converts the power on the pole from AC to DC; another box that does the metering so utilities can bill you; then you’ve got the radio; and then you’ve got multiple antennas,” said Aaron. “We’ve integrated all that into a device when plugged in you can’t see it from 25-35 feet.”

The 4G Ubimetro device dimensions are about 8 inches by 15 inches by 3 inches. Ubicquia’s patented small cell device plugs into the streetlight, and clamps on to create a secure mounting. It has omni-directional antennas. Its 5G small cell is roughly the same size.

In terms of the radio antennas for the small cells, Ubicquia designed those itself using in-house talent from a team of C-suite executives that previously worked for Motorola.