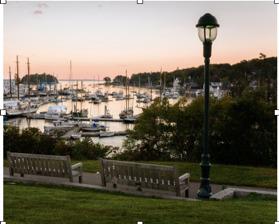 May 27, 2020, Penobscot Bay Pilot - Camden, along with Rockland, Rockport, Thomaston, Waldoboro, Union and South Thomaston, is now in the process of converting its streetlights to LED fixtures. In Camden, the goal is to reduce streetlight electrical energy consumption by 66 percent, and reduce overall streetlight operational costs by 76 percent, within the first year.

After circulating a request for proposals, Camden contracted with RealTerm Energy, an Annapolis, Maryland-based company that works with numerous municipalities in making the energy conversion. It is working now with 40 municipalities in Maine.

The total is $161,000, including the acquisition of the streetlights from Central Maine Power.

RealTerm manage the conversion/installation and charges a percentage on top of the amount the vendors and contractors charge for equipment and installation.

“Twenty-year project savings are estimated to be at $842,279, given that LEDs require significantly less electricity than the high-pressure sodium lights currently in place,” according to a May 27 news release from the Town of Camden.

RealTerm Energy is providing customized lighting designs and supporting Camden in the selection of its new LED light fixtures based on products that best suit the Town’s needs.

The town chose Acuity Brands luminares, concluding that they “yielded the best balance of energy savings, cost efficiency and long-term performance,” the release said. “Furthermore, the fixtures meet the International Dark-sky Association’s (IDA) guidelines to include full cut off and 3000K or lower color temperature.”

Hedstrom Electric, of Camden, will install the new fixtures for the town, beginning in June.

RealTerm Energy is deploying Ubicquia smart lighting controls for the Town’s streetlights which allows for future “smart and connected city” offerings, both lighting and non-lighting related, the release said.